LAKE WANAKA HALF - DEFENDING A TITLE


So, it has been a while between drinks, or should I say blog posts. Actually, it's been a year! Largely due to the fact that for the last six to eight months I have been ‘head down, bum up’ writing up my PhD thesis; you could say this hasn’t left me feeling overly inspired to write in my spare time. In addition, I had a lot of trouble with a hamstring injury in the 6 months leading up to Xmas; which meant things were pretty quiet on the racing front.
However, after submitting my thesis and starting to get back into run-walking in January, I was well and truly excited to be back on the road/trail to full race fitness!

After a tough day on the bike traversing the Pureora Timber Trail a few weeks back, including an intimate encounter with a bridge, it was finally time for what is one of the bigger races on this year’s calendar: Challenge Wanaka, or more specifically, the Lake Wanaka Half. Challenge Wanaka and it’s associated events, continue to build into what is an incredibly popular ‘festival’ of sorts; thanks largely to the stunning location, but also the super slick organisers and volunteers. That stunning scenery could well have proved a welcome distraction from that hurtbox I was about to put myself in; but on this particular weekend, the glacial-fed lake, and surrounding mountains threw up a number of unwelcome obstacles more than anything else!

Case in point: just as race day arrived in Wanaka, so did the gusty mountain wind; not ideal conditions for my first ever race using deep dish race wheels! Not to mention a swim course that could make the saltiest sea dog turn green! Ok, I exaggerate a little; perhaps I’m getting a bit too excited about blogging again; let’s just leave it at ‘not ideal’. It was what it was, so I nervously racked my bike and headed off to the relative warmth of the change tent to get prepared for race start. 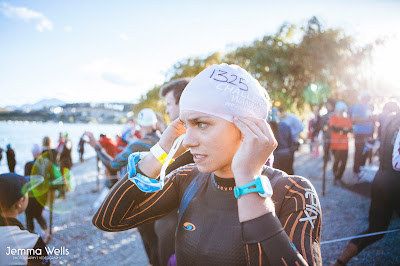 As I was putting on my wet suit, with just 25 minutes to go, I got a surprise message from my sister Jemma to say that after a 4am start (you would realise how ridiculous this was if you knew her sleeping habits) she was making the 4 hour road trip over from Dunedin to support. Stoked!

At least now a few of those nerves switched to excitement. 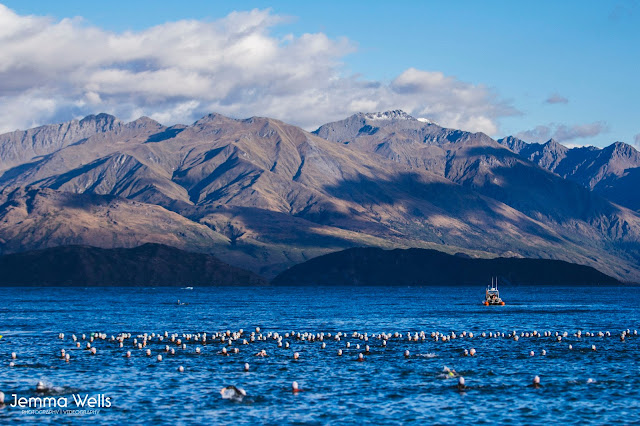 The race start was delayed 15 minutes after the swim buoys turned to kites, and were shifted by the wind. But, by some Wanaka miracle, with 30 minutes to go till race start, the lake calmed somewhat to a manageable state of ‘chop’. I had an average swim, coming out of the water in 9th place. I instantly regretted not positioning myself near the front of the bunch before race, as I missed latching on to the lead pack altogether. But hey, it was early days, and I was looking forward to the bike. 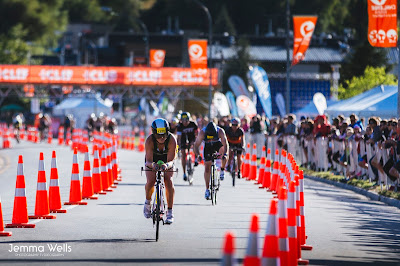 The bike started well, and I managed to overtake four girls in the out-and-back section to Hospital Flat. After passing back through town we hit a solid head wind all the way to Lake Hawea, before turning 90 degrees, to have it side-on, all along the lake. This lakefront stretch was even slower than the head wind, as the strong cross wind meant I had to ride out of my bars to prevent my bike from being blown out from under me. However, another 90 degree turn at the end of the lake and the hard work had all been worth it! Yay for tail winds!

All was going well and I was enjoying the ride, right until I came to the old red bridge in Luggate; 30km to go. I approached the bridge, perhaps a bit too quick (Not so ‘yay for tail winds’), and as I bumped my way over the boards lining the bridge deck my seat post dropped an inch. Bugger. I carried on, but I was now pretty uncomfortable, thanks to my new cramped riding position, and I started to get a little frustrated with myself. Perhaps worst of all, I began to question whether I was now able to make up time on the other girls in front.

It wasn’t until a fellow tri club member (who I had passed earlier) came riding past me, that I realised how much time I was wasting being frustrated with myself about not tightening my seat well enough. After a little ‘moment’ – that may or may not have involved a small monologue, out loud, relating to hobbits, that was laced with a few expletives – I achieved the necessary attitude change. It was time to put some of that frustration to use! I pushed hard till the end of the bike, in my slightly squat position, and managed to come off the bike in second place.

I was slightly wary of my running coming into the race; ok, quite wary. I had felt pretty good in training recently; however I was yet to run over an hour without stopping since coming back from injury. Because of this, I knew I had to run ‘smart’.

About 7 km into the run, Rebecca (in 3rd) passed me, looking impressively strong. I had a feeling that was going to happen and decided not to go with her; instead I stuck to my own pace (coach’s orders). Staying patient on the run was a great decision, and I had enough in the tank to push up Gunn Rd hill and overtake Rebecca to be in second place once again. After the hill I picked up the pace and was informed by my trusty support crew (Jem, Craig and Wanphen) that I was now gaining on the leader. It was now a case of staying relaxed and trying to keep good form. Not too far down road, near the turn off to the Outlet, first placed female, Shannon, came into sight. 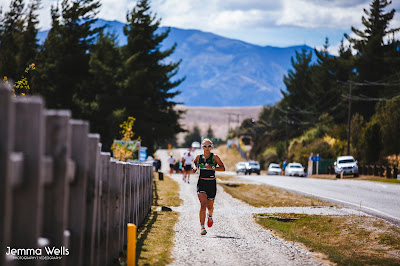 I passed Shannon with 6-7 km to go and knew now it was just a case of doing everything I could to keep moving towards the finish. Despite really starting to fade in the last couple of kilometres, I managed to hold the lead to finish in a time of 4 hr 59 mins. A slower time that last year, but considering the conditions, I was pretty darn stoked; and pretty darn knackered! Nothing a bit of champagne couldn't fix though... 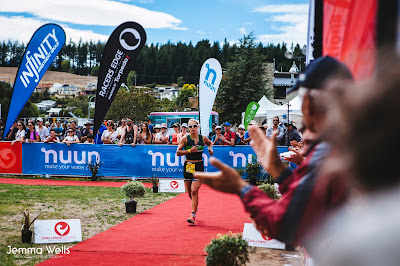 A massive thanks to my sis Jem for making the trip over from Dunedin for the day to support me (and take some pretty cool photos too!). This gave me a much needed boost and some added motivation on race day. Also, a big thanks to Coach Brendan for the continual advice and support. Thanks to my bike mechanic Tom Farr for always making sure my bike is ready to roll (if only I knew how to tighten a seat post when building it out of the bike bag haha!!). A special mention to Zeenya Clothing for the fantastically bright gear I get to train in as well. And of course, thanks to Mum, Dad, and my Uncle Bruce, who supported me from a far, and almost had Jemma’s thumbs falling off after a day of frantic race updates via Facebook.

I am now looking forward to dusting off the MTB ready in time for XTERRA Rotorua.
Woohoo! Redwoods! 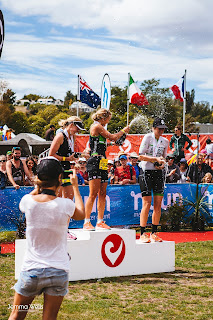 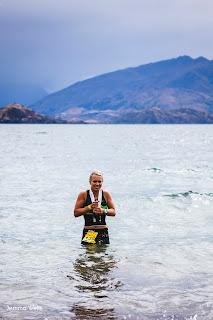 Promote your Page too

Hannah is a 25 year old triathlete, based in the Bay of Plenty, New Zealand.
Her current focus is on Off-Road Triathlon and Half Ironman events.